The Philly to State College basketball pipeline was established in 2011. Pat Chambers decided to leave Boston University and take on the tremendous challenge of breathing life into the basketball program at Penn State University. Along with Alabama, Texas and USC, Penn State is one of the premier “football” schools in American.

Basketball in State College was thought of as something to occupy the space between the Bowl Game in January and the start of Spring football. How would Chambers eek out some space for his program in the mind of the Happy Valley faithful? How would he establish an identity for his program?

Born into the Philadelphia basketball culture, Chambers decided to bet heavily on what he knows. A Philly guard himself, Chambers placed his fate and that of the Penn State program in capable hands of Philly guards. He had an affinity for the guys that endured trials and tribulations. His first recruit, Devonte “DJay” Newbill, was unceremoniously dumped by that scalawag Buzz Williams after committing to Marquette. After enduring a year playing in Hattiesburg, Mississippi, Newbill agreed to join Chambers at Penn State.

Newbill would go on to have a wonderful career. He finished with 2105 points, 681 rebounds and 340 assists. Moreover, and more importantly, he paved the way for future Nittany Lions from the 215. John Johnson transferred from Pitt, Shep Garner was a 4-year starter out of Roman Catholic. Big Mike Watkins from MCS joined the squad. Nazeer Bostic, Lamar Stevens and Tony Carr joined the program all at once. John Harrar put down the football pads and decided play a little power forward in the Big 10. Izaiah Brockington left St. Bonaventure and became a key member of the Nittany Lion club that was ranked as high as #9 this past season.

Well… here we go again… another Philly guard that has been through some real ups and downs has decided to join Chambers and the Nittany Lions. Twenty-four months ago, Sam Sessoms had exactly one (1) scholarship offer from Binghamton. In two All-League seasons, Sessoms put up 1151 points, 254 rebounds and 253 assists. 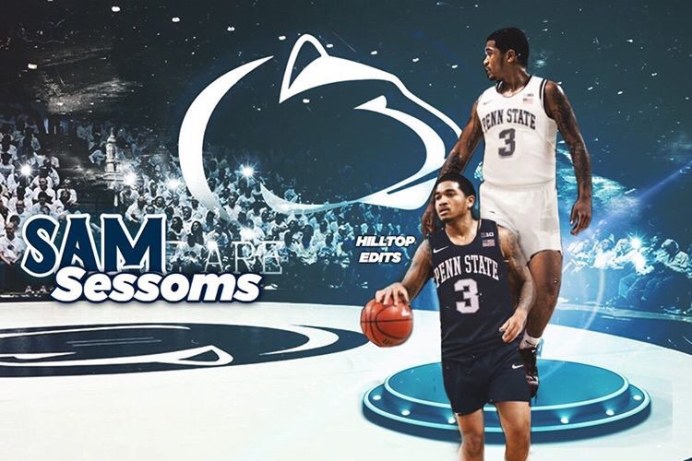 Desirous of an opportunity to compete at the highest level, Sessoms has decided to join a Nittany Lion club that was ranked in the top 25 most of the last season. He will redshirt a year have two seasons of eligibility remaining.

When asked why he chose Penn State over Rutgers, Wichita State, Marquette, Clemson and 50 other suitors, Sessoms said “It’s a great school, degree from Penn State will be huge for a boy from the Bottom section of West Philly. And, the Penn State alumni family is huge, I look forward to becoming a part of the network. As far as basketball is concerned, I think it’s a nice fit. I can see myself growing as a player and person under Coach Chambers and the coaching staff. Most importantly after basketball, a degree from Penn state would be good for me for the rest of my life.”

One of the most entertaining and competitive players in college basketball, Sessoms will provide Chambers with yet another Philly guard with a chip on his shoulder. Expectations will be high and Sessoms will exceed them.

We are currently experiencing a health crisis unlike anything we have ever seen before. Virtually all colleges and high schools across the nation have shut down and eliminated all direct instruction and shifted to online delivery of educational services.  As a result, athletic competition at both the collegiate and scholastic levels has come to a screeching halt. No NCAA tournaments or state HS championships for winter sports like basketball. Moreover, and perhaps more importantly, the recruiting process has been drastically altered.  Many rising high school seniors, unsigned seniors and 5th year prep prospects find themselves in the worst imaginable situation.

Thousands of boys and girls across the nation were expecting to play in AAU/grassroots Live Period events in front of college coaches in April. They were prepared to take unofficial visits to campuses far and wide in hopes of landing coveted athletic scholarships. They expected to see scores of college coaches coming through “open gyms” to evaluate them and their teammates. None of this is happening. For the first time ever, the college recruitment process has been drastically altered midstream by external and unforeseen forces.

It has to be tough for kids to see their peers accepting scholarships and committing to play in college. Well-known and established Division 1 prospects that have been on the radar screen for a while continue to receive offers, calls and texts. College coaches are even conducting virtual unofficial and in-home visits for the top prospects on their lists.

For years, Black Cager Sports Media has facilitated communication between elite basketball prospects and Division 1 college coaches. We have entered into an agreement with National College Preps (NCP) to distribute NCP 2K Men’s Basketball Scouting Reports to Men’s and Women’s College Coaching staff across the country. 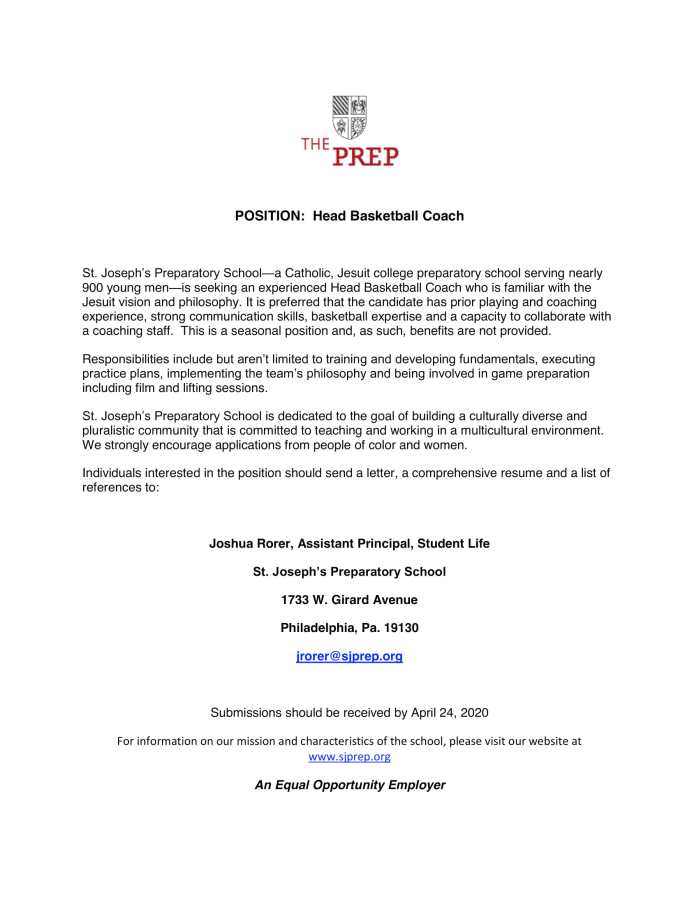 March 23, 2020 By delgrecowilson in Amauro Austin, Uncategorized Leave a comment

*Lynn Greer III, Kai Champion & Jackson Piotrowski have all noted that they plan to attend prep school in the fall..

David Robinson 6-8 220 C Springside-Chestnut Hill — Rim Runner, Loves to rebound, beats other bigs up and down the floor, protects the paint.. (High D2 to Low 1) 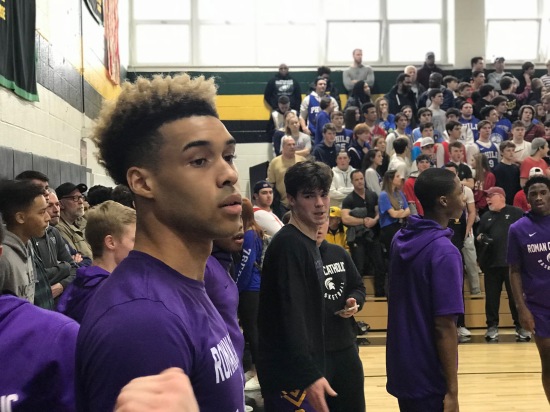 After heavy thinking and evaluating. Basketball Spotlight has determined that the Mike Melton 2020 NJ State Player of the Year is Jamir Watkins from Trenton Catholic Academy and here’s why.

In a year which we have no McDonalds All American, TOC winner or State Champions factor in. I had to look at what I saw on the floor. When I saw Watkins face the Top 3 teams (Camden, Roselle Catholic and Patrick School) in the state he was undeniably “THE BEST PLAYER” on the floor even in defeat. Secondly, if you switched him with any other player in consideration their team would become better while TCA would actually lose more games. Finally, no other player dominated in the way he did. He handle the rock, scored from all three levels and played about the rim better than anyone else. Some might not agree but hes my pick! Jamir Watkins was the best player in the State of NJ!

Delgreco K. Wilson recently joined National College Preps (NCP) as the National Director of Basketball Scouting. We sat down with Mr. Wilson to discuss his thoughts as he begins his work with NCP. 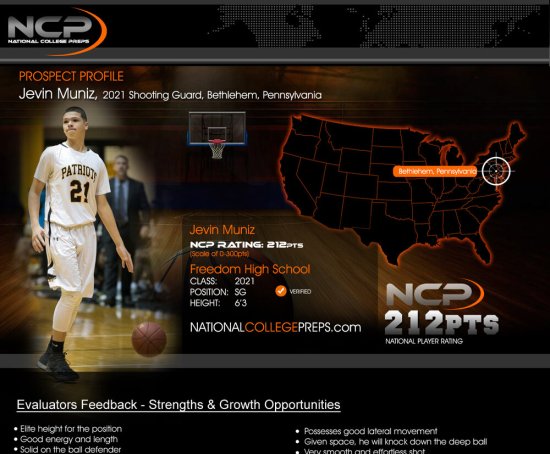 NCP: You’ve had a scouting service and recruiting platform for over 5 years and it’s been very well received, why did you decide to join the NCP team?

NCP: What was it about NCP that led you to join forces with them?

DKW: First and foremost, it was the leadership team. Greg Hood and Christian Lockhart have done an excellent job establishing NCP as the pre-eminent Black-owned college recruiting platform in America. These brothers are Clemson alums. Greg was running back for the Tigers. They have worked hard to position NCP as one of the top football recruiting platforms in the country. NCP’s reputation is outstanding among SEC, Big 10, ACC and other D1 football programs. Moreover and more importantly, they have developed and refined an outstanding computer-based scouting system. Their state of the art software will allow me to quickly share more information on more student-athletes than I ever could have through the Black Cager Scouting Service. Whereas, I have had to limit the number of prospects I could scout in the past, that is no longer the case.

In fact, I really look forward to working with low Division 1, Division 2, Division 3 and NAIA programs to match them up with qualified prospects. Additionally, we are really excited to give the girls as much attention as we give the boys.

DKW: Yes, I have… But it’s always been limited. Again, as a boutique firm, I kinda focused on elite players. For example, a few of my favorite girls were Ashley Rosario (nee Louge), Alliya Butts, Nelli Perry, Aja Ellison and Tamyra “Mookie” Laws. Ashley Rosario was named Most Valuable Player for the Saint Joseph’s University Women’s Basketball team in 2010. She was one of the top post players in the Atlantic 10 and Philadelphia Big 5 during her career. Alliya Butts finished her career at Temple with 1,936 points, 420 assists, 292 threes, and 280 steals. She ranks second all-time at Temple in points. Alliya owns the all-time career records for threes and steals. She finished her career ranked fourth in assists. Alliya is the only player in Temple women’s basketball to be named All-Conference four times and is just the second player in Temple history to be named to four All-Big 5 teams. Nelly Perry scored over 1,000 points over a career that started at Clemson and ended at South Carolina. Nelly finished high school career with 2,091 points to become her school’s all-time leading scorer and the 24th player in South Jersey to score 2,000 points.

Aja Ellison played 3 seasons at Maryland and finished her collegiate career at Texas A&M where she set season career-highs for minutes played, points, rebounds, assists and field goal percentage. Tamyra is one my favorites. She a gritty tough girl from “Norf” Philly. A 5’8” guard her toughness was on full display when while playing for Frederick (Md.) Community College, pulled down 42 rebounds in a game against Howard CC. That season she averaged 21.9 points and 18.8 rebounds per game. She would finish her college career at Immaculata.

So yes… I’ve worked with girls, but not enough of them. There are so many girls that need the push that a good scouting service can provide.

NCP: Can you name a few girls that college coaches should be paying attention to right now?

DKW: Because (South Carolina Women’s Head Coach) Dawn Staley is a good friend of mine, I always make mental notes when I see girls that can play at the highest level. I make sure to pass the names off to Dawn whenever we talk. A few of the high level girls I have noticed recently are Hannah Hidalgo a freshman guard from Paul VI HS (NJ), Cire Worley a freshman guard from Abington HS (PA), Ava Sciolla a sophomore guard from Pennsbury HS (PA) and Destiney McPhaul a junior guard from West Catholic Prep HS (PA). These girls are all destined to play Division 1 basketball. If we can work with the families to give them the exposure and push that gets them where they want to be, my objectives will be more than satisfied.

NCP: When can we expect to see you out and about representing NCP?

DKW: I told Greg and Christian, I’m gonna start right away. While we deal with this horrific coronavirus situation, I can’t go watch live basketball. But, I am developing the NCP basketball prospect database. I am taking calls from college coaches, high school players and parents. We are reviewing films. We are making referrals and establishing connections.

More than ever before, I’ve been in touch with my friends that coach at the small college level. These guys are always looking for good players and they work at some strong programs. I stay in touch with guys like Gerald Holmes, Bloomfield College, Dan Burke, Wilmington University, Tim McDonald, Cabrini University, Damien Blair, West Chester University, Alfred Johnson, Elizabeth City University, Brian Gorman, Becker College (MA) and Jim Rullo, Neumann University. More than ever before, I’ll be able to help them identify good small college players.

NCP: We are excited to have come aboard our team and we look forward to helping a lot of kids transition from high school to college.

DKW: We will be the number 1 and the dominant Basketball Recruiting Service in the mid-Atlantic region by this time next year.

The Black Cager
Blog at WordPress.com.