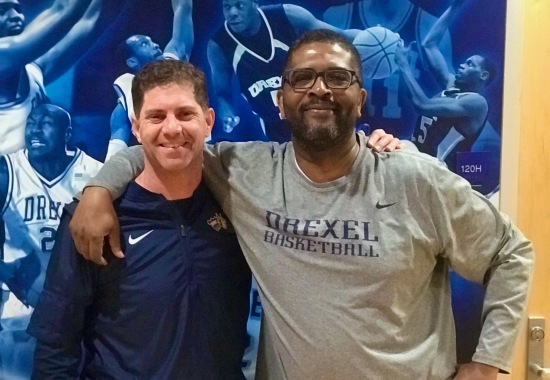 Drexel Men’s Basketball Head Coach, Zach Spiker states, “We are pleased and excited to help Wilson & Woods continue covering college and high school sports in the Greater Philadelphia Region. The show is informative and entertaining! We look forward to working with Wilson & Woods to promote the Dragons and the special brand of college basketball played in Philadelphia.”

Wilson & Woods provides a unique brand of insightful coverage of collegiate and scholastic athletics. The hosts, Delgreco Wilson and Erick Woods, delve into NCAA-related issues such as compensating student-athletes, academic eligibility and the lack of minority coaching hires. However, the core of the dialogue is always the actual games themselves. Who’s getting it done? Who’s winning? Who’s coming up short? This show highlights the chemistry between two friends, one from Philadelphia and the other from St. Louis as they break down the latest action in college, high school, youth and grassroots basketball and other sports. 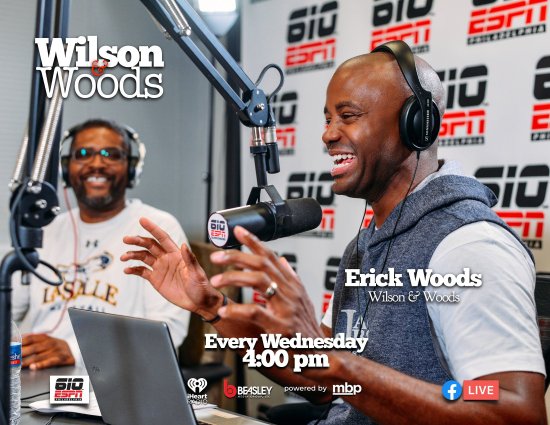 Since the show began airing in November 2019, Wilson & Woods has built a dedicated audience of over 50,000 radio listeners and 5,000+ livestream viewers. Leading figures, both local and national, from the world of amateur athletics have appeared on the show. Among the prominent guests have been Kamal Yard, Director and Howard Hudson, Coach from Philly Pride Basketball (Under Armour), Rob Brown, Director (Team Final) and City Councilman, Isaiah Thomas (Sankofa HS Coach). Don Jackson, The Sports Group and John Lange, Ballard Spahr, two of top sports attorneys in the nation have appeared as guests. Top notch basketball writers, Mike Jensen, Philadelphia Inquirer and Don Hunt, Philadelphia have shared their thoughts with viewers and listeners.

Wilson & Woods takes pride in providing its audience with the information they need as well as the analysis they want. 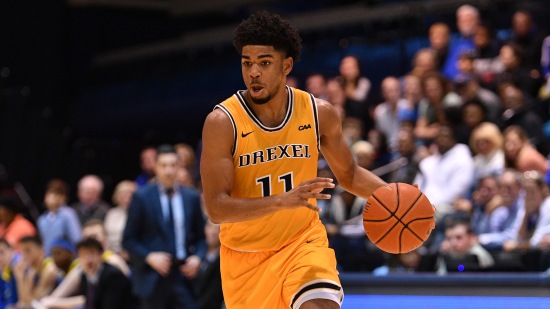 About Drexel Men’s Basketball
In his fourth year at the helm, Zach Spiker’s Dragons currently sit tied for 3rd place in the competitive Colonial Athletic Conference. Drexel sports a league record of 5-2 and stand at 12-8 overall. They are 7-2 over their last nine games. The Dragons are is tough to beat the newly renovated Daskalakis Athletic Center where they are 9-2. They are led by two All-League level performers, Last year’s Colonial Athletic Association Rookie of the Year, Point Guard Camren Wynter leads the team in scoring (15.6 ppg) and assists (5.3). Power Forward James Butler is one of the nations top rebounders (11.9 rpg) and second on the team in scoring (12.5).

About Wilson & Woods
Wilson & Woods is a, Black-owned and operated, Philadelphia-based sports talk show on 610 ESPN radio. Episodes air live weekly every Wednesday from 4:00 pm to 5:00 pm with the live episode simulcast on the Wilson & Woods Facebook page. The show broadcasts from 610 ESPN Radio’s studio in Bala Cynwyd, Pennsylvania. It also has “roadshow” broadcasts under development for events such as the weeks of the NCAA Playoffs and the Philadelphia Catholic League Playoffs.

The entire show is available as a free podcast following the broadcast of the recorded show. Episodes are also uploaded to the Black Cager Youtube page for viewing.

About 610 ESPN Philadelphia
610 ESPN is a Philadelphia radio station with an all-sports format. Owned and operated by the Beasley Broadcast Group, the 610 ESPN studios are located at 555 City Avenue in Bala Cynwyd, Pennsylvania and its transmitters are located in the Crescent Park section of Bellmawr, New Jersey.

Flint, assumed the helm at Drexel in 2001 after five years as the head coach of the UMass Minutemen. Fifteen years later, he left as the all-time winningest coach in Drexel program history (331-289) and a four-time winner of the CAA’s coach of the year award.

Flint elevated the Drexel program to unimaginable heights… His Dragons were, at times, the best the City of Philadelphia had to offer.

In one memorable stretch, Flint’s Dragons walked three blocks over and knocked off St. Joseph’s 72-56 at the Palestra in front of 7,622 on December 2, 2006. Exactly a week later, they drove about 20 minutes up Lancaster Avenue and spanked Villanova 81-76 at the Pavillion while 6,500 sat in silence as the final buzzer sounded.

Ten days later, the Dragons took a four hour ride to upstate New York and smacked Syracuse 84-79 at the Carrier Dome. This time 16,328 Orange fans got to watch the giant slayers do their thing.

Drexel players celebrating their Dec. 19 victory over Syracuse, which was ranked 23rd at the time. Credit Dennis Nett/The Post-Standard, via A.P.

Ohhhh… Bruiser and Drexel were ready for anybody… anywhere…

Three days after the ‘Cuse game, Bru and his boys jumped on the El, transferred to the Sub and down went Temple 69-54 in front of 4,677 at the Liacouras Center. For good measure, in February the Dragons hopped on one of those commercial flights to Omaha, Nebraska and took down Creighton in front of 17,607 rabid Blue Jay fans.

Let’s recap… Drexel… On the road… Knocked off…

Get the FUCK outta here! Naaaaah… You’re making this shit up…
Except, I’m not making it up… I was there… I watched it unfold…

During his tenure, Bruiser led the Dragons to four NIT appearances, including a trip the quarterfinals with that 29 victory squad in 2012. 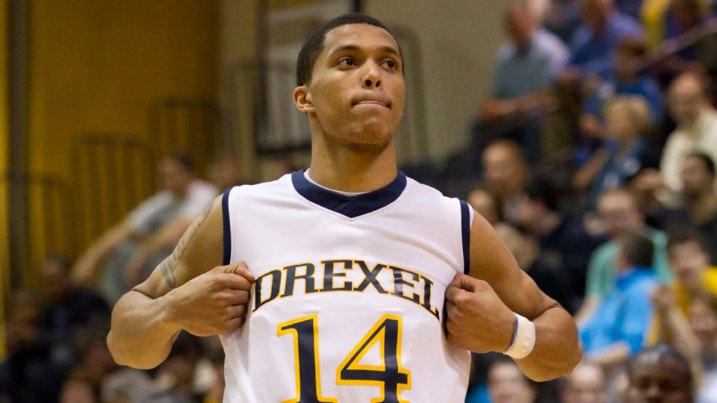 However, the Dragons experienced a steady decline in performance following that 29-win season. Flint’s two best offensive players Chris Fouch and Damion Lee experienced major knee injuries forcing them to miss entire seasons. After Lee decided to play his final year of eligibility with the Louisville Cardinals, Flint limped through his final campaign severely undermanned and posted a 6-25 record to close out a great run at the program about 30 or so blocks from his childhood home in Southwest Philly.

When he reappeared in the the Big 10 on the bench with Archie Miller at Indiana, many probably thought we had seen the last of Bruiser Flint coaching in Philadelphia. 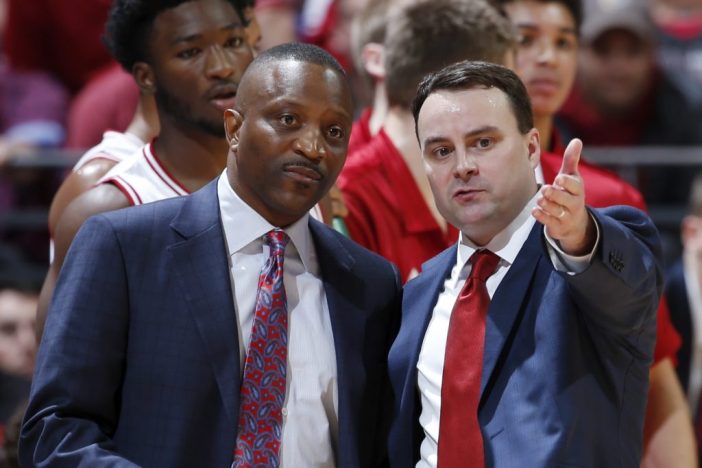 Well… That is certainly not the case… On Wednesday December 18, 2019 at the Tom Gola Arena on the campus of La Salle University, Bruiser Flint roamed sideline in front of both benches. All you had to do was look closely…

You saw the finely tailored suits, the polished and elegant shoes and the charismatic smiles masking the burning desire to win the game. The unyielding effort on the defensive end of the floor and of course the unforgiving nature of the interactions with the referees. 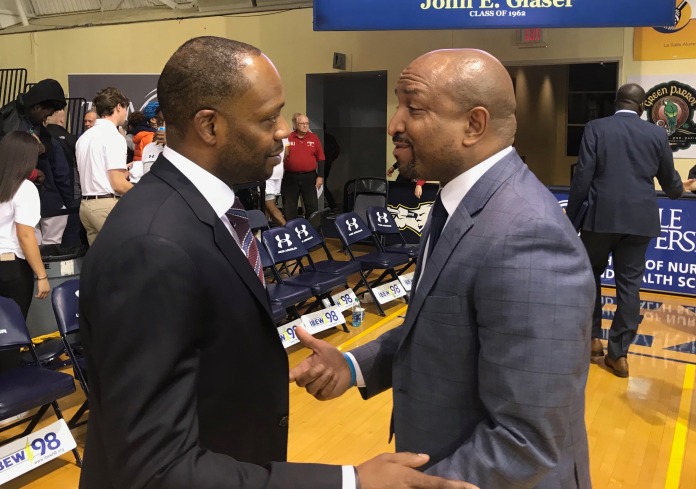 The Head Coach of the visiting Wagner Seahawks, Bashir Mason was the man with the ball in his hands when Flint’s Dragon’s knocked off all the BIG BOYS in 2006-07. From the moment he arrived at 34th and Market as a freshman, Mason was Drexel’s point guard. Executing Flint’s game plan from 2003-2007, Mason scored more than 1,000 points while dishing out nearly 500 assists. Those that watched him play know that Mason’s calling card was defense. He was first four-time member of the Colonial Athletic Association (CAA) All-Defensive Team, he also became the first player in league history to be named Defensive Player of the Year as a freshman following the 2003-2004 season.

A true student of the game while playing for the Dragons, Mason told me then he wanted to be like then Drexel Assistant, Geoff Arnold and Bruiser Flint. He has certainly made his mentors extremely proud. Mason graduated from Drexel with a Bachelor’s Degree in Sports Management. After earning a Master’s Degree of Science in Education from Wagner in December of 2013. Mason, who was the youngest head coach at the Division I level when he was named the 18th head men’s basketball coach in school history on March 26, 2012, and at age 35, remains one of the nation’s youngest head coaches, checking in as the sixth-most youthful head coach heading into the 2019-20 campaign.

La Salle’s Head Coach, Ashley Howard, was introduced to the coaching profession by Bruiser Flint. Howard began his coaching career as a student assistant coach under Flint at Drexel University, in 2002, after medical concerns effectively ended his playing career for the Dragons. Flint and Arnold, embraced Howard and immersed him into all aspects of the coaching profession while he was still an undergrad.

Like most young athletes in the prime of their playing careers, Howard was understandably frustrated about his inability to compete on the court. But, he is extremely grateful that Flint and Arnold had the foresight to give him a set of tools, skills a a perspective that have served him well during his rapid rise through the coaching ranks.

After his apprenticeship under Flint and Arnold, Howard was fully prepared to embark upon a Division 1 coaching career. In 2004, following graduation, Howard was hired as an assistant coach at La Salle by Dr. John Giannini. He spent four years with the Explorers before returning to Drexel in 2008 as an assistant coach. He was part of a staff that led the Dragons to consecutive 20-win seasons, including a school record 29 victories in 2011-12. Howard successfully recruited Damion Lee (Golden State Warriors/NBA) to the Dragon program.

In 2012-13, Howard served as an assistant on Chris Mack’s staff at Xavier University before landing back in his hometown with Villanova. Prior to taking the reigns at La Salle, Howard most spent five seasons as an assistant coach at Villanova, helping the Wildcats to a pair of National Championships.

During his tenure at Villanova, Howard was involved in all aspects of the Villanova program including on-court teaching, player development and recruiting. He was instrumental in helping the Wildcats win two NCAA National Championships and setting a new NCAA record for the most wins in a four-year span.

Howard and Mason are the progeny of Flint and Arnold. Their success can be attributed directly to the time they spent being nurtured and “cussed out” by Flint and Arnold. We can certainly expect both to continue the tradition. And, we can also expect them to do so while wearing some of the nicest threads you will see on the sidelines. Flint and Arnold wouldn’t have it any other way.