Please save the date, September 22, 2018… Save the time and the location in your phone… Seriously… Right now… lock this event into your calendar. Learn from and work with some of the finest college coaches in college basketball.

Dedicated to improving the game, Martelli previously served as President of the NABC’s Board of Directors and as a member of the NCAA Division I Men’s Basketball Ethics Coalition.  Martelli is currently on the NCAA Division I Oversight Committee. His presentation will center on NCAA Reforms & the Rice Commission.

Ashley Howard is the 19th coach in La Salle Basketball history. A two-time National Champion, Howard came to La Salle after five seasons as the top assistant coach to Jay Wright at Villanova University. While at Villanova, Howard was involved in all aspects of the Villanova basketball program. On-court teaching, player development and recruiting were his main areas of focus. Villanova set a new NCAA record for the most wins in a four-year span while Howard was on staff. Howard’s will discuss “Transition Offense.”

Aaron McKie will assume the reigns of the Temple Men’s Basketball Team for the 2019-2020 season. A Philadelphia product, McKie graduated from Simon Gratz HS. As a senior, helped lead his team to the Public League Championship and a 26-4 record, averaging 18.9 points, 9.9 rebounds, and 7.2 assists per game.  At Temple, McKie was named first-team All-A10 and he was named to the A-10 all-tournament team as a senior. As a junior, he was the 1993 A10 Player of the Year, after averaging 20.6 points per game. McKie was a first round (17th pick) in the 1994 by Portland. He also played for Detroit, Philadelphia and Los Angeles. McKie will teach “Press Break.”

Jamion Christian was officially name  as the 17th head coach in Siena basketball history in May 2018. The previous six years, Christian led Mount Saint Mary’s. Christian installed up-tempo offense and “mayhem” defense. Many compare his approach to the “havoc” defense popularized by Shaka Smart at VCU and Texas. Christian was named NEC COY in 2017. His talk will focus on “Attacking a Zone Defense.” 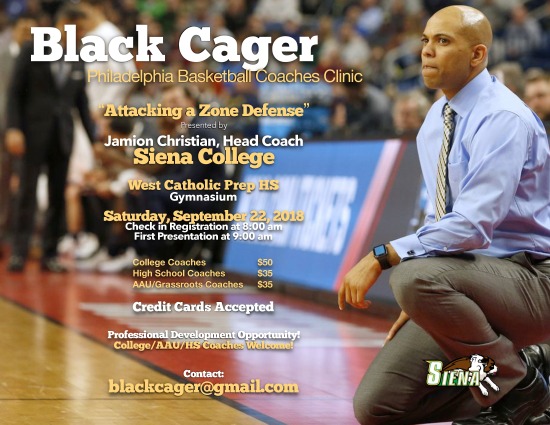 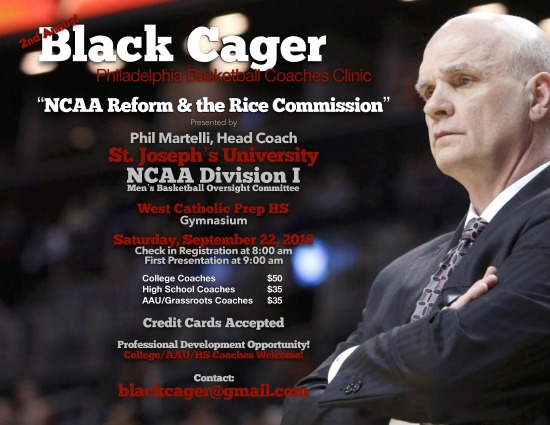 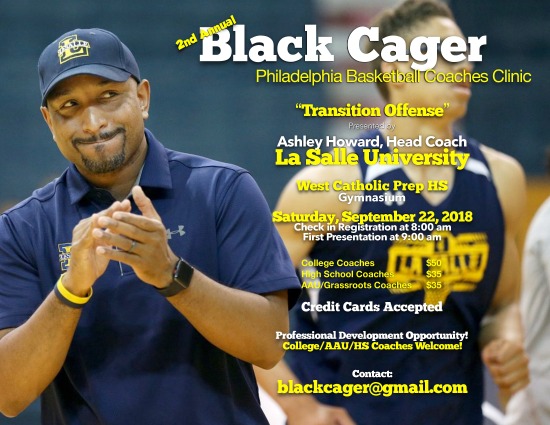 Admission is $50 per college coach, $35 per HS/AAU/Youth Coach or $25 per coach with a staff of three or more. Doors open at 8 a.m. with the first speaker scheduled to start at 10 a.m. All registered participants will receive snacks and beverages in the morning.

Coaches interested in attending are encouraged to register early. Any questions about the camp can be directed to Delgreco Wilson via email at blackcager@gmail.com or via phone at 267-251-1355.