Philadelphia, PA – November 17, 2019 – The Chestnut Hill Griffins hosted their home opener and put on an entertaining contest with the Bald Eagles of Loch Haven University Saturday afternoon that ended in a 78-61 win for the visitors. The final score did not indicate the competiveness of the game as the talent of both teams was on display in a game of runs where LHU happened to be the last team to get hot.

Loch Haven Head Coach Mike Nestor knew if he would have to get solid games from his “leadership group” of Christian Kelly, Matt Cerruti and Jesse McPherson if his team was going to leave the stately campus in Northwest Philadelphia with a win. He got that he needed as the three combined for 50 points with the 6-5 Kelly leading the triumvirate with 20. 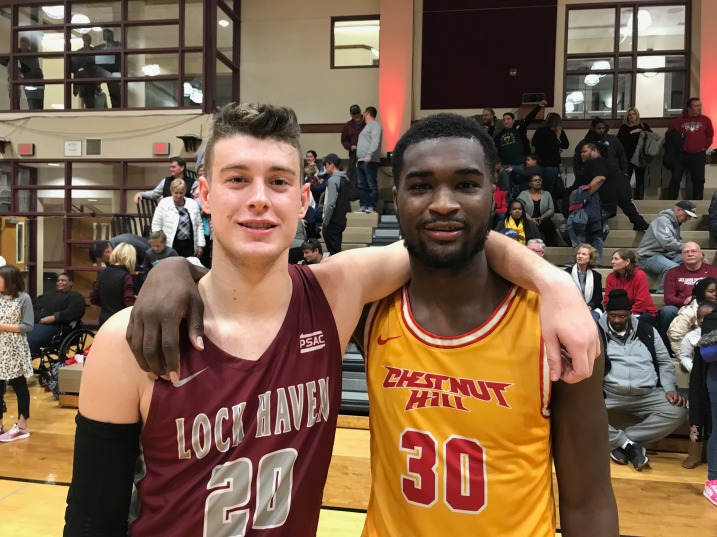 The Griffins also placed three players in double figures led by Amir Warrick’s 13 markers. The 6-6 guard, who is adjusting to being a primary ball handler, was a perfect 5-5 from the charity stripe to help buoy his team through a rough patch from the field as they searched for consistent shot making for the bulk of the afternoon. They never really found it, finishing with a poultry 30% on made field goals.  Scottie Spann, Jr., the former Sankofa Academy standout, chipped in 11 while James Rider, a normally reliable shooter from Baltimore, added 10 points.

The game was played at a good pace and despite scoring droughts that spanned 7 minutes for Chestnut Hill and 4 minutes for Loch Haven, it was very engaging. In addition, both programs have reason to be optimistic going forward as both will welcome key additions next month that will bolster their talented teams. Loch Haven will bring back team leader Jihad Barnes, a 6-1 lead guard from Philadelphia. Chestnut Hill is looking forward to adding former Cheltenham Panthers Ahmad Bickley and Trevonn Pitts, their most productive player last year.

Both head coaches were prescient in pre-game interviews as they spelled out the challenges and positives they expected to see in this early season matchup. Coach  Jesse Balcer expressed concern regarding his teams ability to hold on to the ball. The Griffins proved him prophetic committing 24 turnovers on the day. Coach Nestor expected to lean on his team’s abundance of experience, having several key players in their 2nd and third years in the program.  The cohesion his upperclassmen laden team showed throughout the game was a key in their victory. The Bald Eagles also used that experience to calm themselves and work through early offensive struggles. LHU committed 9 first half turnovers, but only 3 in the second. The Griffins also made significant improvements in their ball handling as the afternoon wore on, committing an alarming 18 first half giveaways, but just 6 in the second.

“We struggled in the first half , but our defense carried us,” said Coach Nestor, adding “I knew we would start hitting shots,” expressing confidence in his team’ offensive abilities. A big reason for this confidence is Christian Kelly, who averaged 20 ppg and 7 rpg last season. Kelly didn’t just play on one side of the ball either, turning in an impressive defensive effort with 4 steals and 4 blocks to help stymie the Chestnut Hill at key junctures of the game.  Kelly, who boasts a 6-8 wingspan and 9-inch mitts, used his “active hands” to disrupt the Griffins most of the game.

Junior Jesse McPherson, formerly of Archbishop Carroll and Simon Gratz product Nasir Campbell, also a junior, provided Loch Haven with strong performances in the paint as well. The quiet McPherson, who prefers to lead by example, provided a inside scoring presence to complement the shooting of Cerruti and slashing of Kelly.  Coach Nestor is excited about the energy and physicality Campbell brings to his team, which struggled to rebound the ball last season.  Campbell threw down a thunderous slam while drawing a foul in the second half  that brought the lively, supportive crowd to their feet.

Chestnut Hill looks to the 6-2 Scottie Spann, Jr. to bring energy when he comes of the bench. “It’s my job to bring energy” said Spann, who is one of the “tough Philly kids” Balcer will rely on going forward. Another is Julius Phillips, an Archbishop Wood product who provided a solid floor game for the Griffins in this contest, finishing with 7 rebounds, 6 points and 4 assists. 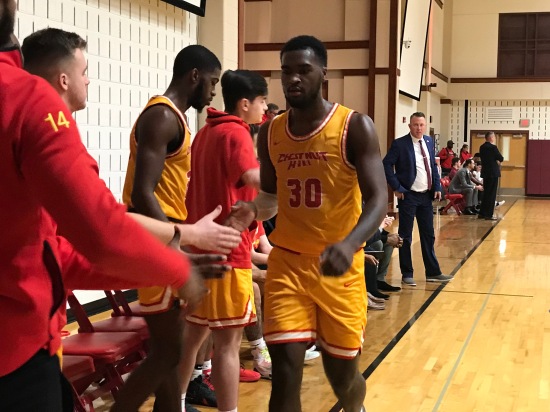 “Trust the process, trust the coaches and trust each other,” said Phillips when asked what the team needs to grow and improve as the season continues. Another boost will be the addition of Bickley. “The lack of a true point guard really hurt us,” said Coach Balcer. “We weren’t able to get rolling.”

In the immediate future Loch Haven (2-0) will host the Wolves of Cheyney University and Chestnut Hill (0-4) will look to upend the Bloomsburg University Huskies in a road game.