On Tuesday, October 3, 2017, Mayor Kenney, Superintendent Bill Hite, and others at the top of the city leadership totem pole announced a plan to organize and expand sports opportunities for school-age youth throughout Philadelphia. The Philadelphia Youth Sports Collaborative (PYSC) was debuted as not just as a way to develop athletes, but as a way to spur genuine social change.

Everybody round the way understands the positive role sports can play in the socialization of urban youth. In theory, everyone will be on board… In practice, naaaaaah….

The key players said all the right things… Superintendent Hite emphatically declared, “We need to be providing a system so that ALL young people have opportunities.”

The newly minted, PYSC Executive Director, Beth Devine hit the right notes when she said they will “build the game plan for the biggest and best sports development system in the country… Sports, can change a person’s trajectory.”

The heavy hitters are onboard… Otis Hackney, the city’s chief education officer; Michael DiBerardinis, managing director; and David Montgomery, chairman of the Phillies, have been charged with leading a new task force to analyze the state of youth sports and youth development and to make actionable recommendations for building a citywide system of such programs.

Lofty and ambitious goals for sure… Nonetheless, really good stuff!

But, I’m sure this seems like a daunting and highly complex task. Philadelphia has over 300,000 school age children and a sprawling disconnected (and frequently dysfunctional) network of youth sport organizations, recreation programs and school-based leagues.

I’ve met both Mayor Kenney and Superintendent Hite. I like them both… They seem like earnest and dedicated public servants pursuing the common good.

As a person intimately familiar with the complex and dysfunctional nature of the disparate sub-systems the Philadelphia Youth Sports Collaborative is trying to corral, I humbly and respectfully offer one modest suggestion…

While the big shots were downtown outlining their plans to develop “a system so that ALL young people have opportunities,” middle management level city employees were holed up at one of the oldest and largest of the German-American clubs in Philadelphia. A committee of District 12 Athletic Directors were meeting at the Cannstatter Volksfest-Verin Club to CRUSH the sports dreams of two young Philadelphia Boys.

While the city’s elites rolled out their plan in City Hall, 12.7 miles away, the middle managers were actually changing the trajectory of two young Black boys. Unfortunately, the direction of the change, however, is not what Ms. Devine had in mind.

T.J. Taylor is a 17 year old boy with a 3.9 GPA. He comes from a stable two-parent home. Extremely bright, he has already exceeded the 1,000 point barrier on his SAT exam. His parents Rodney and Joy Taylor have instilled all the proper values into their son. T.J. has impeccable manners and is always extremely respectful.

T.J. Taylor and his mother Joy Taylor before their District 12 hearing

T.J. was ranked in the top 20 of his class at Boys Latin. An inquisitive young man with high aspirations, T.J. did a lot of research and soon realized that he would be much more competitive for admission to elite Universities like Colby, Oberlin, Morehouse, Swarthmore and Bates if he was ranked in the top 1 or 2 of his class. With the annual cost of these schools in the $60,000-$70,000 range, T.J. and his parents felt is was worth it to transfer to, Overbrook, his neighborhood school where he would have a shot at Valedictorian status. A quarter million dollars is still a LOT of money for some of us. Besides a close friend of his was murdered just blocks away from Boys Latin.

He made the move… A sound, rational well-thought out FAMILY decision…

Another factor working in Taylor’s favor is the fact that he is a strong and solidly-built basketball player. While he is not among the city’s elite, he is a very solid, tough hard-nosed player with a sophisticated understanding of the game. A Philly guard! They are always in demand at all collegiate levels. Like two of Philly’s very best HS guards Shipley’s Sam Sessoms and Cardinal O’Hara’s Antwuan “Booty” Butler, Taylor’s skills were forged during weekly Bottom Ballers wars in the quaint and extremely hot City Recreation Center located at 34th and Haverford. The Bottom Ballers Basketball Club, arguably, has routinely produced some of the most competitive and well-rounded guards in Philadelphia. T.J. Taylor is a Bottom Baller.

His basketball skills combined with his strong academic profile make him an ideal prospect for NCAA Division 3 programs with high admissions standards. With a strong senior season, Taylor would garner attention from all the top D3 programs in the mid-Atlantic region for sure. He would be able to pursue his dream of playing college basketball while matriculating at one of the nation’s finest institutions.

Socialized largely through sports, Taylor is a poster-child for the program envisioned by our well intentioned leaders Mayor Kenney and Superintendent Hite.

Just one problem though…

“Fuck T.J. and his aspirations!”

While the cameras were rolling in City Hall, PIAA District 12 committee members ruled that T.J. Taylor was ineligible to play basketball at Overbrook for his senior year…

Like Devine said… “Sports can change a person’s trajectory.”  I saw it happen.

Alas, on this day, there was a doubleheader… Next up…

Yazid Powell transferred out of Boys Latin High School in late February. He enrolled at West Philadelphia High School. By early May, Powell and his mother, Romaine Sims, determined that West was not a good fit after his grades dropped precipitously. 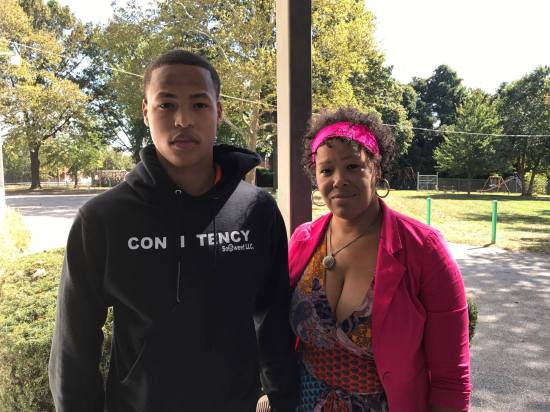 She ruled out her neighborhood high school, John Bartram. She cited repeated violence such as when a student “knocked out a teacher” among other concerns. She also felt that Yazid was too familiar with all of the kids at Bartram. She decided to enroll him at Overbrook High School.

While Yazid DID NOT EVER PLAY AT WEST PHILADELPHIA HS, he did compete with the Philly Hurricanes basketball club in the late spring and throughout the summer.

While playing with the Hurricanes, Yazid exhibited breathtaking athleticism. Finally healthy after a nagging ankle injury he BLEW UP on the grassroots/AAU circuit. Yazid, literally can hit his head on a 10 foot basketball rim. A very good shooter, his range extends well beyond the three-point line. He caught the eyes of college coaches. He has several Division 2 scholarship offers and many Division 1 programs have promised to come watch him play during his senior year.

Ms. Sims was feeling wonderful… Having lived through the murder of Yazid’s father and watching his 28 year old brother end up in the penitentiary, her young son was on his way.

Then middle management called another audible…

At the request of the West Philadelphia High School Athletic Director, supported by the Boys Basketball coach, the District 12 committee ruled Yazid ineligible to compete his senior year at Overbrook.

Even though Yazid NEVER donned a WPHS uniform, they were determined to keep him from playing at Overbrook. Their argument won the day. They won. Their achieved their goal!

Seriously… Think about that shit…

At the exact same time Superintendent Hite were standing before the assembled mainstream media outlets contending “We need to be providing a system so that ALL young people have opportunities” his employees were working diligently to DENY an opportunity to a young fatherless boy living in Philadelphia’s public housing and a mild-mannered kid with a 3.9 GPA.

What the hell are we doing?

The grandiose objectives outlined for the PYSC are admirable. I truly hope they succeed…

Lord knows we need all hands on deck.

For now though… I’ll settle for simpler, tangible and more easily obtained goal…