I am leaving today

I want to be a part of it

You don’t get to choose your family. You are born into your tribe. However, sometimes your friends become family over time. Because it’s a conscious choice it makes the bond even stronger and more special. Every once in a while you get to witness incredible journeys unfold.

It was the last week of February 1992 and my friend/brother, Geoff Arnold, and I decided to make our way the legendary festival of excess and debauchery known as Mardi Gras. Now, we are from the southern end of Darby Township, a town of 3,000 people, 2 bars about 7 churches and 3 traffic lights. We had always wondered about Mardi Gras.  The closest thing we had back home were basement $1 parties with red lights.  The highpoint of these parties was a slow drag with “that” girl when the DJ played the Whispers. I had just turned 27 and we wanted to experience the lewdness, drunkeness and gluttony first hand. We wanted to see it, touch it and smell it.

We wanted to experience a truly special week.

We decided to head for the bayou. After flying into Houston, we had to catch a prop plane for the short jaunt to Baton Rouge, Louisiana. Maaaan listen…. The propeller driven plane scared the shit out of me. It felt like we were flying in Snoopy’s doghouse during one his legendary battles with the Red Baron.

“They have potholes in the sky? What the fuck?”

Fortunately, we reached Baton Rouge. We were a lil’ battered and a lil’ bruised, but we were safe. We were ready to go all out.  We drove to, Geoff’’s sister, Jeralyn’s house. Immediately, her husband Larry Galloway, made us feel right at home… My man from day one…

That first night we went out to pick up some seafood. So… we enter this huge fish market. It was unlike anything I had ever seen in my life. They don’t do it like that in Philly… Tony’s Seafood Market is the largest purveyor of fresh fresh and crawfish in the Gulf region. Tony’s has been known to sell as much as 50,000 pounds of live and boiled crawfish in one day. I didn’t know places like this existed. It was a seafood mall.

Ever the gracious host, Larry asked me what I wanted. “We down south… Catfish man… I want the catfish.” I watched them take the live catfish out of the tank and expertly slice and dice it in a matter of seconds. Within just a few minutes were on the road back to the house.

Once we reached the kitchen, Larry said “Yo Del, check this out” as he unwrapped the fish. The filets still had a pulse. While Tony’s had removed the heart, the” heartbeat” remained. Beyond fresh, is the only way to describe the catfish. Jeralyn, battered it up and fried the best catfish I have ever had. I remember that day like it was yesterday.

The main reason that day sticks in my memory is because while Jeralyn was preparing the fish there was a little boy propped up on the counter in a baby carrier. He was about 11 weeks old. I liked this kid. He was friendly and outgoing. He wouldn’t stop smiling. He was inquisitive, reaching, grabbing and full of energy.  That boy was Langston Galloway, number 2 for the New York Knicks.

Yeah… later that week, Geoff and I made our way to New Orleans and, of course, we dove head first into the sinning, partying, drinking, parading, bead throwing and tittie observing that is Mardi Gras. They don’t party like that at the Darby Township Fire House… But, the thing I remember most… the thing that sticks out the most about that week was meeting that friendly, smiling little boy.

Fast forward 23 years, to January 8, 2015, my college buddy, Hansel Canon and I had the distinct pleasure of driving south on 95 to the Verizon Center in Washington, DC and watching that little boy play in his first NBA game against John Wall and the Washington Wizards. Nervous and clearly pressing a bit he managed to score 7 points in 17 minutes. He shot 2-8 from the field, while dishing 3 assists and grabbing 2 rebounds. Still, not a bad first night in da muthafuckin’ league…

We waited to talk to him after the game. The visitors passes he provided gave us access to the area next to the team buses.  As usual, he was unfailingly polite and extremely appreciative while expressing gratitude for coming to see him play his first NBA game. My friend, Hansel Canon, has been to just about everyone of Langston’s college and tournament games.  Like everyone else that has gotten to Larry, Jeralyn and Langston, he has fallen in love with them. He was able to freely express his joy to Langston and they engaged in repeated hugs and celebratory “Black” handshakes. You know, the kind President Obama gave Kevin Durant during his visit with the Olympic team.

Langston and Hansel Canon after immediately after his NBA debut

For me, it was tough… I was happy but I had to be reserved. Langston said “Man.. you ain’t come to none of my D-League games, but you here at the first NBA game.” Wanting to appear tough and unaffected, I replied “Man… Fuck the D-League.”

I had to keep it together… Throughout his life, I’ve always held back on effusively praising him. After this game, I said “You did good, you look good… Now we gotta stay up here.”

“I gotchu!” was his simple reply.

He said those words with his usual confidence. Nothing extra… Just straight talk, “I gotchu!”

While nearly everyone professes a profound admiration for  “swagger”, they are usually referring to a false bravado exemplified by chest beating, unnecessarily boisterous gesturing and endless self-promotion. Lang, on the other hand, oozes “swag” because he really believes he belongs. He makes absolutely no effort to convince you.

He just shows you….

Phil Knight should really holla at the boy, because he exemplifies the Nike tagline “Just Do It” more than any kid I know…

When he said, “I gotchu!” I knew he meant it… I knew was going to prove he belonged.

I had to hurry up and make my way toward the exit… I was about to lose it… I was gonna cry… No way I could let Lang see me crying tears of joy!

“Sheeeeeeeeeit…” as Clay Davis would say, I’m the Ol’ head… He’s the youngbuck… I’m the “Uncle”… He’s the “nephew”… I didn’t want to confuse him… So I had to leave before I started crying like a little beeeeyotch…

The very next night, Geoff calls me and we’re watching Lang playing in a nationally televised game against the Houston Rockets led by the magnificent James Harden… In this, his second game, he plays 31 minutes and scores 19 points. He shot 6-10 from the field, 3-4 from the 3-point line, while snaring 4 rebounds and dishing 3 assists. During the course of the game he had a “here I am” moment when the Rockets failed to put a body on him and he got hold of a missed shot with his right and and flushed it cleanly through the basket with incredible force. Look closely in the background and you will see Tim Hardaway, Jr. and Amare Stoudemire leap from their seats in support of their new teammate. Everybody loves Lang…

Of course, the struggling Knicks have lost both games in which he has played, but there can be no denying that Lang has displayed an NBA level of skill, athleticism and confidence.

As I write, I think about the summers when he came to Philly. For years, I would always make him stand back to back with me and let him know he was still a little boy. Then one summer while in High School, he passed me by… I thought about all the times he would workout in the morning and come to my office to work on SAT/ACT prep even though he was NCAA qualified.

Lang just wanted to do better… just because…

I think about when Lang and his father collected thousands of sneakers for a community service project.  I think about the time the Galloways arranged for a significant donation to the HERO Foundation in North Philadelphia because they wanted to give back to a city that accepted Langston with open arms. 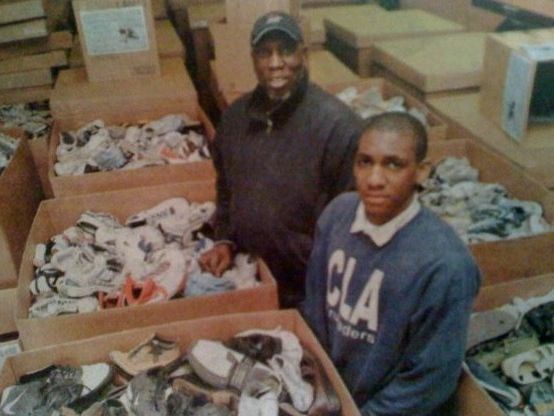 Larry and Langston Galloway with thousands of donated shoes

I think about the times we talked about his recruiting process. I think about all the times I pretended to be impartial while his uncle was recruiting him. The same brother/friend I went to Mardi Gras with had to grind it out and really recruit the kid that was on the kitchen counter. After 3 state Championships, being named All-State a few times and showing out at Nike’s Peach Jam, Lang was recruited at a pretty high level. Texas A&M, Baylor, LSU and few other high majors were in hot pursuit.

I think about all the times I pretended I wanted him to go where he would be happy. I was pump faking… I wanted Lang to go to St. Joseph’s. I wanted to see every game he played. I wanted to be a part of his college experience. I wanted Geoff to land his nephew. But, I always acted like I was indifferent. Truth be told… I wanted to see Langston to win an A10 Championship like his Uncle Geoff. I wanted Langston to place the nets around his neck and hold the trophy high over his head. 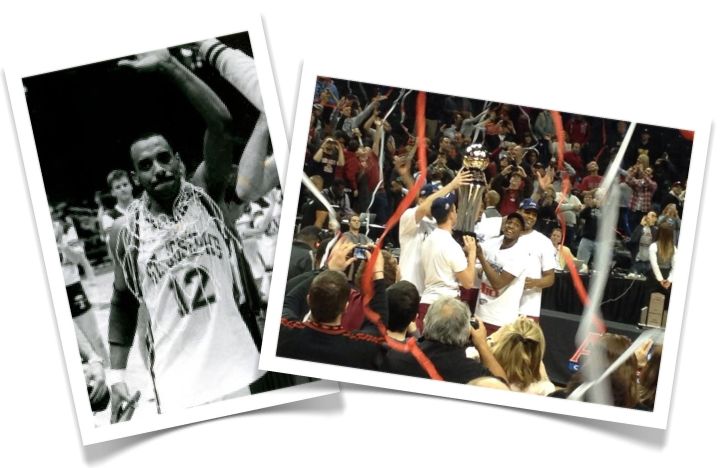 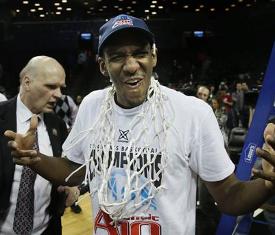 Langston Galloway after 2014 A10 Championship Game

What I don’t think about… What I don’t worry about is his future with the NY Knicks. For me, that was secured the moment Lang said “I gotchu!”

Larry and Jeralyn have done a phenomenal job with the little boy on the kitchen counter.  Over the years, they always make sure to thank me for supporting Langston. It was an absolute pleasure… I thank them for sharing their son with me and the rest of Philadelphia for four years.

Now appearing in NYC: Langston Galloway! His heart is pumping like that catfish filet from Tony’s… real strong!!

Yo Spike… Tell the Knicks to “Do The Right Thing” and lock my youngin up for the rest of the year!!