The Wissahickon High School boys basketball team is  greater than the sum of its parts. “We don’t have any stars,” says boys head coach Kyle Wilson (below, left). They haven’t needed any to be considered a good team as they have for the most of the 15 years Wilson has been at the helm. “We play together for each other.” 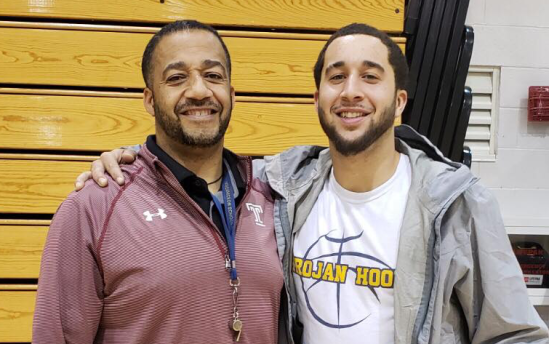 Observing a recent practice, one clearly see the patient way Wilson and his staff work to instill concepts and principles central to the Trojans’ selfless brand of basketball. Wilson and the Trojans posted a 20-7 mark last season. Wissahickon basketball is consistently competitive in the ever changing landscape that is high school basketball.

The student athletes are attentive and attempt to take in every word of instruction, giving only nods in response. The focused and respectful manner they receive coaching caught first year assistant, Andrew Trella, off guard.

“We have great kids,” Trella explained. “I didn’t expect them to just listen to me right away.” He went on to say how much he appreciates working with the kids and how their attitudes and respectfulness has made coaching them easy. While Trella is new to the staff, Michael Scheier, long time assistant and head of the JV team is well versed in coaching and brings a wealth of knowledge to the program.

“(Scheier) always brings a different perspective,” Wilson said while explaining how the decade and half together allowed them to build a symbiotic relationship based on trust and mutual respect. The two often ask each other hard questions and are comfortable being very candid in how they answer those questions.

Some of those hard questions involve how to deal with parents and players who may have an issue with the staff over the decade and a half the pair have coached together. Both are sensitive to the parental perspective as both have experienced the ups and downs of watching their own sons come through the Wissahickon program as players, albeit from the coach’s seat. According to Scheier, “would I expect that from my kid?” was a question they would ask and answer with compassion as they continue to help other kids develop and grow under their stewardship.

Coach Wilson is enjoying an additional bit of assistance this fall as his son, Chase Wilson, has come back to the area and is helping him get the team ready for the season. The younger Wilson, is a former Wissahickon standout, was continuing his basketball career at Hillsborough Community College in Tampa, Florida before an injury prematurely ended his season. This unfortunate happenstance has become a boon for the Trojans as Chase Wilson has been able to provide additional guidance to a team that will have to help a number of players learn new and bigger roles this upcoming season. “We will ask them to trust in what we are doing and the framework we have in place,” Trella responded when asked how the staff would help the players adjust to new responsibilities and expectations.

One such player is Carmen Ostroski, a talented 6-5 wing forward who was a role player last year. The athletic, National Honor Society student-athlete will be called on to be much more this season. In preparation for the transition he took advantage of Coach Wilson’s generosity with time in the gym this summer. He added that he “worked a lot on my shot creation and shooting.” Ostroski, a junior co-captain, also has bought into the coaching staff idea regarding the team concept adding that ““Execution is going to be huge for us. We have to get our execution down.”

Another key player for the Trojans this season will be senior c-captain Eddie Fortescue, the four year varsity member who was named second team All American Conference last year. Wissahickon had three all league performers in 2017-18, including Max Rapoport (1st team) and Zach Reiner (2nd-team), however the hardworking scoring guard is the only one of the trio who returned. He will lead his younger teammates and remind them to “be in the game and stay focused.”

Coach Wilson will is hoping he can also find a couple of “D.O.R.K(s)” to contribute. They are players who “Defend, are Offensively apathetic, Rebound and Know their role.” This isn’t surprising at all coming from the head coach of a team well-known for their cerebral style of basketball.