Hysier “Fabe” Miller has been one of the best guards in Philadelphia for three years… For the first two, he was a key cog for Martin L. King Jr. coach Sean Colson in the Public League. A great PUB and college guard that fought his way to the NBA, Colson has developed a well-earned reputation as one of the premier basketball trainers in the nation. When he’s not coaching MLK or Philly Pride, he can be found at the Steph Curry’s camp, the Under Armour Top 100 camp or in the gym with NBA players like Atlanta Hawk teammates DeAndre Hunter and Charlie Brown. Miller is the latest high level player to refine and polish his skills under the guidance of Colson. But that’s just part of his lineage… The boy is from the Southside…

He is the latest in a long line of super competitive, no-nonsense South Philly guards.

After rising early in the morning to travel from the southern end of the the city to the far Northwest to attend Martin L. King, Jr. HS for two years, Miller has found a basketball home in his beloved South Philly. He has joined a loaded Neumann-Goretti squad picked by many, including, the Black Cager as the #1 team in the region before the season started. Some wondered how Miller would adapt to his new role after being the ‘man’ for MLK last year. Would he be able to adjust to playing off the ball? How would he handle not being the man? All those questions have been cast aside.

A quiet, confident and highly intelligent young man, Miller has embraced the opportunity to play in front of capacity crowds against some of the best teams in the nation. Grateful for the opportunity to play in the Catholic League for the legendary Carl Arrigale, he has gladly come off the bench and he has served as a starter while the Saints have navigated an extremely tough early portion of their schedule. Miller has added considerable value to Neumann-Goretti. In a matchup with Westtown in December, Miller exhibited exceptional lateral movement and a willingness to play ‘chest first’ on-ball defense against the best opposing guards. He frustrated the highly regarded Jalen Warley and forced him commit several turnovers in the middle of the court as  Neumann-Goretti ran away with the game. 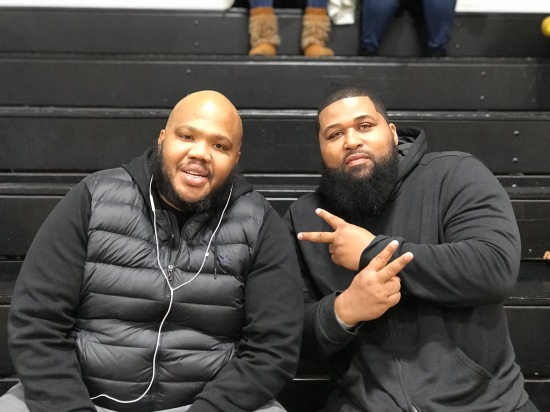 Tonight he was matched up with another highly regarded high major prospect, Lynn Greer, III. Greer is an established star in the Catholic League. He is capable of scoring in bunches. Greer doesn’t need screens or much help at all. He’s able to create space off the bounce utilizing excellent crossover and hesitation moves. In most games, Greer is a problem.

Tonight, Arrigale was able to leave Miller on Greer for extended periods by himself with no help. It was a great guard matchup… Greer played an excellent floor game. He played within himself, made very few mistakes and did not force the issue.

Overall, Miller and Greer were a push. They essentially cancelled each other out. For those who haven’t followed Martin L. King. Jr. over the past couple of seasons, that may come as a surprise. Throughout much of his High School career, Greer has been a top 100 player… He has participated in USA basketball and played on the EYBL circuit with Team Final and Team Takeover.

Miller, on the other hand, is just a hard nosed, hard playing tough kid from the Wilson Park projects. He’s hungry… He NEEDS a scholarship! There’s no college without a scholarship. He’s earning his keep the hard way… Game by Game… The folk that matter are noticing, as soon as he emerged from the locker room after the win tonight, Wagner Head Coach Bashir Mason offered him a scholarship.

A great culmination to a great evening of high school basketball for Miller.

He helped Neumann-Goretti withstand a barrage of breath-taking, gravity-defying, FUCK yo Momma’s Momma, NBA quality dunks from Jalen Duren. It’s simply ridiculous to think Duren is just a sophomore. He is beyond physically dominant in one of toughest high school basketball leagues in the United States of America and he’s not even half way through his high school career.

I don’t know how to adequately describe the manner in which he attacks the rim. Duren dunks on your ancestors… HARD as shit! Big Momma and Pop Pop are begging their grandsons to do something… anything… make it stop!

But… when forced to make basketball plays away from the rim, he’s just ok. He’s not an adequate shooter and he has yet to develop reliable go to moves and counter moves. Moreover, going to him down the stretch is a questionable strategy because he’s yet to prove himself a capable free throw shooter.

Fouling Duren in one and one or bonus situations can be equivalent to forcing a turnover. He missed 3 out of 4 crucial free throws down the stretch. For the game he was a 1 out of 5 from the free throw line. Greer was 3 for 7.

In a game that close, between two evenly matched teams, the margin for error is razor thin… Neumann-Goretti capitalized…

Hall is simply a magnificent high school basketball player. On a team with two kids that will be Division 1 point guards, Hall is the unquestioned primary ball-handler. At 6’8” he towers over opposing guards and wings. Until he shoots, one would think that he is a southpaw or ambidextrous. The ball is on a string… He teases opponents by dangling it out in front of them only to yank it back and explode by them when they reach time and time again.

Hall plays downhill, attacking the defense aggressively while keeping his head on a swivel. He’s constantly looking for the help defense, he’s forcing the double team and whenever it comes the ball is abruptly delivered to the player left open for a clean look at the basket. Neumann-Goretti plays good, solid basketball. Carl Arrigale has these super talented kids playing unselfishly at the high school level. He has almost too many weapons at his disposal. 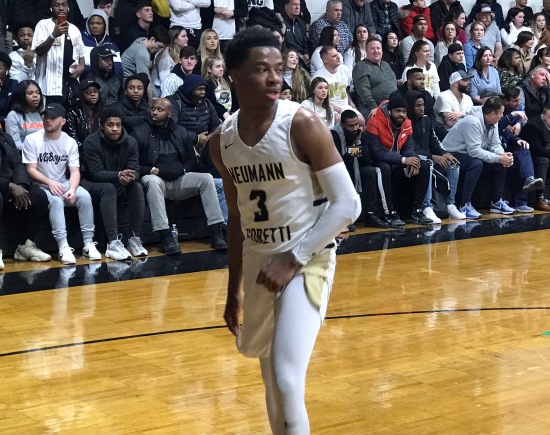 Teams have problems dealing with Hakim Byrd’s combination of speed and skill. In the open court, it’s almost unfair. In most instances, Byrd is gonna lay it up… One way or another… If not, he’s gonna pull up for a three or a mid-range jumper that’s damn near as reliable as a layup. The most aggressive scorer on this year’s version of the Saints, Byrd is playing at an extremely high level. He spells Hall from time to time as a playmaker, but for the most part Byrd is looking to get buckets… And… He does his job exceedingly well! 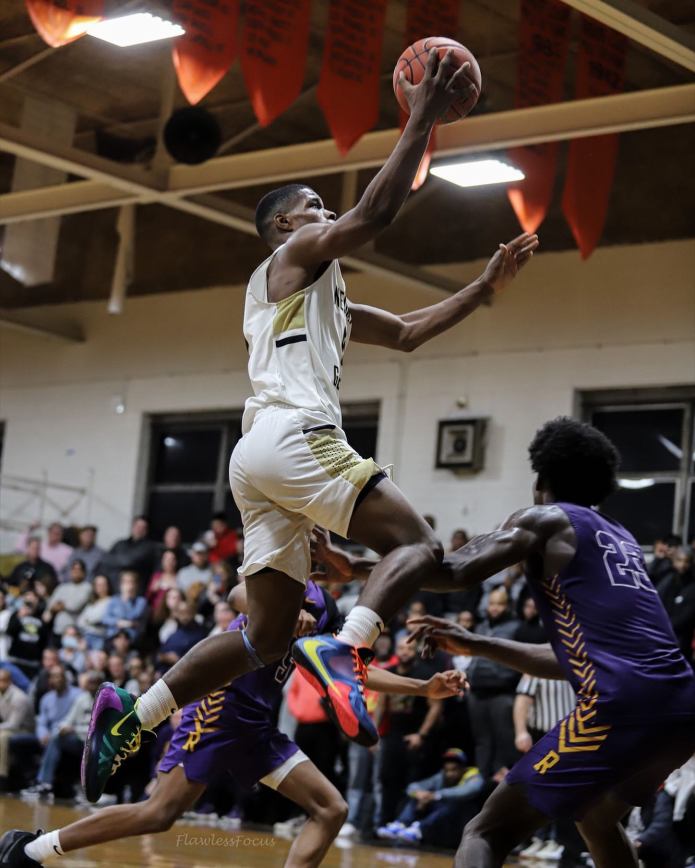