Q. How long have you been at Pennridge Coach Behrens?
A. 21 years

Q. What would you like people to know about Pennridge Basketball?
A. Since 2015, Pennridge Basketball has qualified for the states 3 times and the players from the past are very excited about the current team and the 1st Final Four appearance in school’s history. One the program past stars, Tim Abruzzo, who is serving our country in Libya after a college career at the Naval Academy, sent me an email congratulating our guys accomplishment and very excited about how the program is performing. Another member of the Pennridge Family, who is a pilot serving our country in Kuwait, sent his well wishes to the Pennridge team. 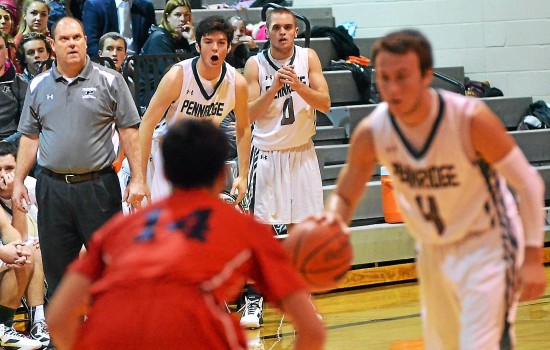 Q. Let’s talk about the recent history of the Pennridge Rams
A. Since 2011, Pennridge has won 5 Division Titles. Since 2012 Pennridge has had 4 1,000 point scorers in Tim Abruzzo, Zach Muredda, Danny Long and Newly All-time Leading Scorer Sean Yoder. A 5th Player went over 1,000 (Max Wagner-Kutztown) but he started playing at another school before coming home to Pennridge. The 2015 Pennridge team knocked Reading (led by Lonnie Walker-Spurs) out of the state playoffs. 2018 Pennridge lost by 2 points to the eventually champions Roman Catholic in the 1st round of states. We have been on a nice run over the past few years.

Q. To what would you attribute to the success that Pennridge has had over the last decade?
A. Just trying to make it a program and not just a team. We are constantly at it, whether it open gyms, Spring Camps, Summer Leagues. We take very little time off. We take time off time off in August and a little bit of time after the season. We had success with Multi-Sport athletes where we haven’t in the past. Guys like Danny Long (Baseball) and one of my current players Jonathan Post (Football) help the program so much and we need those multi-sport guys to compete at the top levels. Kids like that just “LOVE TO COMPETE”.

Q. A lot of people have already heard of Sean Yoder (Navy Commit) and Jonathan Post, tell me about some of the other players that will play tonight
A. Jon Dominic (Senior Guard)-great story of a kid who just “Wanted It So Much”. Played JV last year and started this year coming off our bench. But by the 8th game of the season, he was a starter and now I can’t take him off the floor. Has been averaging close to 12 points a game since inserting him in the lineup and had an incredible 37 point game against North Penn this year. Trent Fisher (Junior Big Man)-Also a JV Player last year, grew about 3 inches this year to get to 6-6. Probably still growing. He has long arms and a soft touch. Worked hard especially with the help of Jonathan Post and is a great team player. Luke Yoder (Sophomore Guard)-Younger brother of Sean, and he is super athletic, sometimes too much so. He can jump out of the gym. He is a great offensive rebounder. Great Future!!!

Q. What should people expect against Abington, even though they have beaten you twice this year?
A. We are confident, we know what to expect from Abington. They have the best player we played this year in Eric Dixon and another special player in Lucas Monroe. Their “Role” players have definitely stepped up to the plate and they are coached very well. Abington also played in a very tough league with teams like Cheltenham, PW and others. But we are coming to compete and play hard every minute of the game and see where that takes us. We are very excited to be here and we know that Abington has been here before being the 2 time defending District Champs. So the experience may make a difference. But let’s see how the 1st 4 minutes play out and we will take it from there.

Q. Thank you for your time Coach Behrens, Good Luck Tonight
A. Thank you Black Cager for reaching out about Pennridge Basketball.