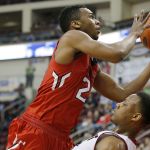 Donta Scott stands about 6’8″ and weighs approximately 220 pounds. For the past two years, he’s been an important part of Imhotep’s frontcourt. As a freshman, he started every game and rebounded relentlessly while playing aggressive defense. Last year was more of the same, although he stepped out on the perimeter more frequently.

Tonight Imhotep opened their 2017-2018 campaign. Their starting point guard is Donta Scott. With coaches from Temple, La Salle and St. Joseph’s watching intently, Scott was the primary ballhandler for the Panthers.

Jamie Ross’ Frankford squad was disciplined and well coached. They competed hard and never “lifted their skirt.” There were plenty of hard fouls as Frankford implemented their version of the “no layup” rule.

Nonetheless, over time it became obvious that Imhotep was simply too big, too strong, too skilled, too athletic and too good.

But it is interesting to note… Donta Scott is the starting point guard for Imhotep. He plays at the top of a 1, 2, 2 full court press on defense. He defends the opposing point guard. He handles the ball every possession for Imhotep.

Will this experiment last? Will it payoff with another Public League Championship? Will they win another State title?

How does it affect discussions about the “best” Philly point guards?

All these things crossed my mind as I watched him lead HIS team. Fatts is tearing it up in Rhode Island and Beatty is down in Columbia, South Carolina. People wondered… “Who’s gonna play point for Imhotep?”

That question has been emphatically answered… Mr. Scott, time is yours…