Archbishop Wood, under Head Coach, John Mosco had one of the great seasons in recent memory.  The 2016-17 season was the greatest in the history of the Wood program. That team featured 5 or 6 Division 1 basketball players. 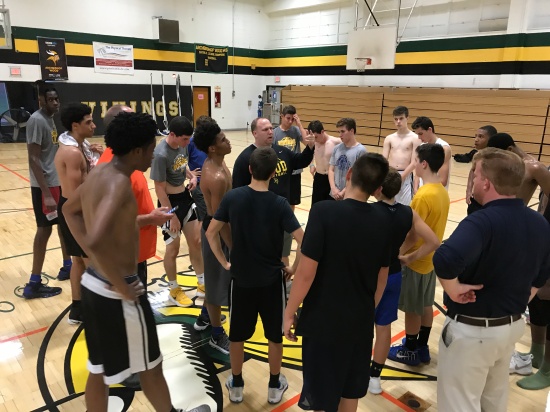 What’s up with this years version? While they return 4 bona fide D1 prospects in the senior class, there are some questions… They lost the “maestro”… As good as the other Wood players are, everyone that watched them realized that Collin Gillespie made each and every one of them better. Alas, he has moved on to bigger and better things… his “big games” are no longer in the Palestra… He now plays in the Wells Fargo Center and Madison Square Garden.

His probable replacement is a prodigy… Rahsool Diggins has a game well beyond his years. He has a tight and smooth handle. He is equally adept pushing the rock with either hand. His court vision is excellent. His willingness to attack belies his youthful appearance. In an era where 16 year old bearded freshman are commonplace, Diggins looks like a fresh-faced middle schooler. His much older teammates have a tremendous amount of confidence in him. It is readily apparent that they respect his game.

One wonders: How will he hold up against Kyle Thompson and Darius Kinnel (St. Joseph’s Prep)? Will Chris Ings and Noah Warren (Neumann-Goretti) be able to get in his head? Will Allen Betrand, Lynn Greer and Hakim Hart (Roman Catholic) be able to push him around? Will scoring guards like Patrick Robinson (Conwell-Egan) and Isaiah Wong (Bonner) force him in to mismatches? Will Antwuan “Booty” Butler be able to “youngbul” him?

The answers to these questions will very likely determine the fate of this years Wood team. Mosco and his assistants may have to take a page out of the hockey playbook. Prodigies like Wayne Gretzky, Mario Lemieux and Sidney Crosby needed space to operate. The “tough guys” on the team made sure they were accorded the necessary space.

Junior forward Julius Phillips, along with senior guards Tyree Pickron (Quinnipiac commit) and Andrew Funk (Bucknell commit) are very tough and gritty basketball players. If they can combine with 6’11” senior center Seth Pinckney and 6’7″ senior power forward Karrington Wallace to give young Diggins some space on offense and support him on defense, Wood can reclaim their place at the top of the Catholic League.

It’s gonna take a team effort to replace the maestro… Diggins exhibits all requisite skills but he is just a kid and he has played ZERO (0) varsity Catholic League games. Watching him today, I realized he will be problem as sophomore, junior and senior. The boy is nice!

If the seniors take a page out of the hockey playbook and make sure the kid has the space and support he needs as he adjusts to one of the toughest high school leagues in the country, Wood will be right back at the Palestra in front of a standing room only crowd of 9,000+ this winter.