Is Steve Kerr correct?  Has the process of becoming a better team basketball player “become completely lost” within the now dominant world of AAU basketball?  Kerr’s sentiments have been echoed by many within the basketball hierarchy.  Detroit Piston’s Head Coach, Stan Van Gundy says, “[AAU] is a bad system for developing players… They aren’t learning to handle the ball, they aren’t learning to make plays against pressure. The emphasis with our high-school players is to get exposure and play as many games as you can and show everybody how great you are.”

The deeply held pessimism is enough to make one wonder if there are any redeeming aspects of AAU/grassroots basketball.  Nonetheless, any knowledgeable basketball person will tell you AAU/grassroots circuits (NIKE, Under Armour and Adidas) have superseded high school in importance for aspiring collegiate and professional players.  Hence, parents face a quandary, do they forgo the most significant platform in terms of exposure and high level competition because of the concerns expressed by coaches like Kerr and Van Gundy?  Or, do they try to identify AAU programs doing the things the “right” way?  I’m going to assume that virtually every parent will choose the latter course of action.

This begs the question:  What does AAU/grassroots basketball look like when it’s done right? Of course, first and foremost the program must be competitive.  Of course, a good AAU program has to win tournaments.  Kerr complains that winning is devalued.  He significantly overstates his case.  Winning matters and it matter a lot.  No one wants to play for a program that get’s smoked game after game. Nobody wants to be on the wrong end of 20, 30 even 40 point blow outs in front of ACC, Big East, Big 10, SEC and A10 coaches. Good AAU programs win games. Some of the very best AAU programs are in the mid-Atlantic region. NJ Playaz, Team Final and WE R1 are doing AAU/Grassroots basketball the right way. They win and their players consistently go on to play at next level.

These are grassroots organizations with well-established support structures and developmental programs that have improved the quality play among their participants. It should be noted that high quality programs enhance the athletic, educational, and social development of the student-athletes. It can’t be all about winning AAU games and tournaments. But, make no mistake these programs win a lot of AAU games and tournaments. 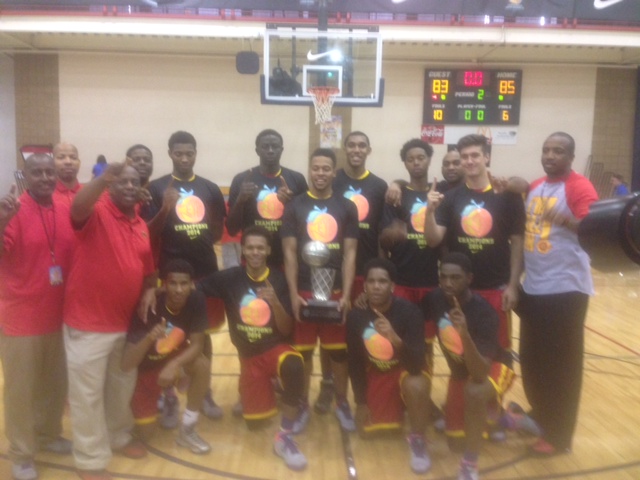 In 2014, Team Final, led by Rob Brown, was the regular season champion of the NIKE EYBL circuit. Their 14-2 record was the finest in what is widely considered the most competitive grassroots league. Jimmy Salmon’s NJ Playaz (pictured above), led by All-American Isaiah Briscoe (Roselle Catholic HS) won the prestigious Peach Jam title. The Peach Jam Tournament provides a culmination for teams playing on the NIKE sponsored the travel team circuit and allows 40 teams to compete for an ultimate goal each summer. It is the premier tournament of the summer. The Final Four of the Peach Jam wan nationally televised by ESPNU (see below).

Another nationally recognized AAU program has emerged out of Middletown, Delaware. Under the direction of Terrell Myers, WE R1 took home both the regular season and UAA Tournament championships in 2014.  Led by Derrick Jones and Malik Ellison We R1 defeated highly regarded Sports U to capture the Under Armour Association title (pictured below).  WE R1, like NJ Playaz and Team Finals, is generally considered one of the most competitive grassroots programs in the nation. All three are consensus top 25 teams, with NJ Playaz and WE R1 coming in 1, 2 in most national rankings. 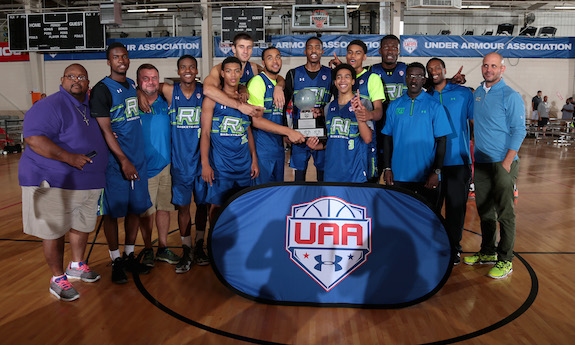 2014 Under Armour Association Champions, WE R1

So, they win big games and bring home hardware from the biggest tournaments.  What else makes these programs special?  Some obvious questions immediately come to mind: Do their players get recruited? Do they get scholarships? The track record of Jimmy Salmon and the NJ Playaz in this area is beyond reproach. Tim Thomas (Villanova), Wayne Ellington (North Carolina), Gerald Henderson (Duke), Eddie Griffin (Seton Hall), Marcus Toney-El (Seton Hall), Vince Carter (North Carolina), Kenneth Faried (Morehead St.), Dahntay Jones (Duke), Sean Singletary (Virginia), Earl Clark (Louisville), Jeremiah King (Drexel) and Kyle Anderson (UCLA). Of course J.R. Smith and Kobe Bryant would have been included had they elected to play collegiately instead of jumping straight to the NBA. Another Playaz alum is NY Giants ALL-PRO wide receiver Victor Cruz. 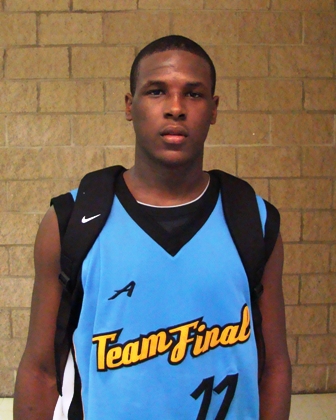 By any reasonable measure, these programs produce kids that get recruited at the highest levels.  But, what else should you look for in a “good” AAU program?  Well, a good AAU/grassroots program build social cohesion and and increase social capital among young people and adults in their respective communities. The younger kids in the program and the larger community should benefit from the success of the older kids.  By the time the players participate on the 16u and 17u teams, they are generally very well known and look up to by younger players in the program and the surrounding community. Pay attention to the twitter and instagram accounts of the players in the program.  Read what they write.  Look at the images they project.  Is this how you want your child to portray himself publicly?  Watch how the student-athletes interact with younger kids and other members of the increasing AAU fan base. For programs like NJ Playaz, Team Final and WE R1, basketball is used as a practical tool to engage young people in their communities through volunteering, resulting in higher levels of leadership, community engagement and altruism among young people. 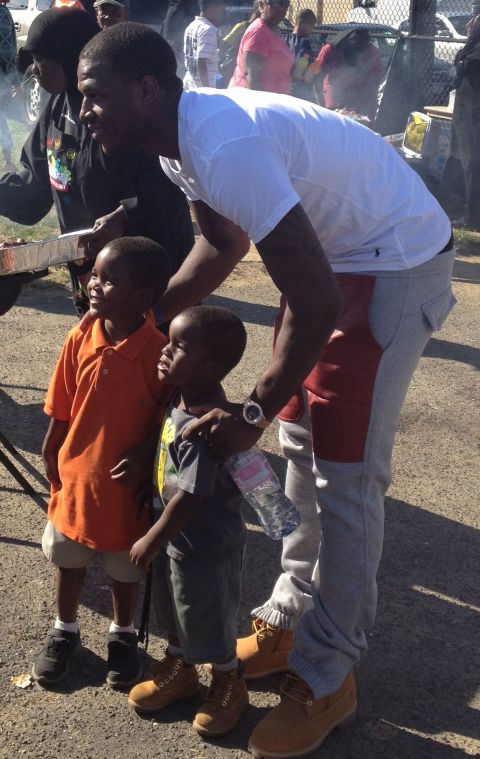 Another indicator of a good program is the intensity of the relationships between the players and level of respect players (and former players) have for the coaches.  The relationships between AAU teammates are just as strong, perhaps even stronger, than those among high school teammates. Young people regularly spend 7,8 or 9 hours in vans traveling out of state to play in tournaments. They eat and sleep together on the road. In each of the highlighted programs, positive peer relationships are encouraged through coaching. If you spend anytime watching the teams practice and play it becomes apparent that social inclusion is very important to the coaches.  Talk to the kids that aren’t the stars on the team.  How do they feel about the program?  Of course, the guys getting all the attention and limelight are likely to be happy.  Are the non-starters benefiting as well?  Do they speak highly of the coaches and their teammates?

Social inclusion also relates to offering equal opportunities to educational programs regardless of ethnicity or basketball ability. There is a great deal of attention paid to ensuring Division 2, Division 3 and NAIA level players are academically eligible.  Rob Brown, Jimmy Salmon and Terrell Myers are consistently monitoring report cards, arranging SAT tutors and tracking GPAs.  Each treats the low D1, D2 and NAIA recruits the same way they treat the ESPN top 50 kids.  When evaluating programs, find out how the last man on the bench is treated.  That is a true indicator of the quality of the program. 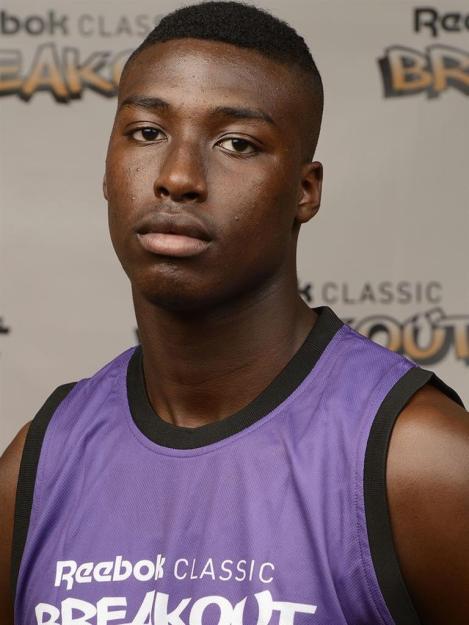 Lastly, find out if their players exhibit a pattern a negative acting out behaviors.  Do they get suspended from high school or college?  Are there allegations or accusations of sexual misconduct or assault? Have their alums been arrested while in college?  Given the recent explosion in the number of criminal incidents involving high profile athletes, it is important to know the people you trust with your children.  There can be little doubt that NJ Playaz, Team Final and WE R1  have a positive impact on character-building in their participating players. The thugh element is virtually non-existent in these programs.  These young men go off to college and the overwhelming majority are highly successful on the court and they graduate.

This can be largely attributed to the respective roles Jimmy Salmon, Rob Brown and Terrell Myers  play within their respective organizations.  Plainly stated, they have high expectations and as a result have a positive influence on the degree of ‘character-building’ within their programs.  Research suggests that participation in organized athletics such as AAU basketball can be used as a means to reduce delinquent behavior. But it’s important to understand that playing basketball alone does not directly impact on negative behavior. Accordingly, good AAU programs combine basketball activities with academic, leadership and job-skills development and training to address risk factors in children and youth.

If you want to see AAU done right visit any one of these programs.